Bert Bongers is Associate Professor at the Faculty of Design, Architecture and Building, University of Technology Sydney, where he has set up the Interactivation Studio in 2008 - a laboratory and playground for research, design, development and teaching related to interactivated environments, interfaces and instruments.

The aim of his work is to create solutions for what he calls the "Human-Computer Mismatch", to enable a better communication between the two virtual worlds or domains - the human mind and the computer programs. These worlds meet, and interact, in physical space and therefore an interface artefact should enable a rich, physical, mutliple degree-of-freedom computer input (control) and multimodal output (feedback) to intensely address the human senses. Haptic interaction has been a central notion in his work. For nearly twenty years he has researched the interaction of artists and others who want to convey their ideas through using computers. By actually building interfaces, from electronic musical instruments to interactive architectural spaces, he has proven that it is possible to create very sensitive devices with relatively low cost sensors, actuators and other hardware. It enables users to reach inside of the machine to take back the control, to make the processes in virtual space malleable through physical interaction.

He has a background in Electrical and Computer Engineering, an MSc. degree in Ergonomics / Human - Computer Interaction from UCL London, and a PhD in HCI from the Vrije Universiteit Amsterdam. He worked as an instrument builder with STEIM (the Studio for Electro-Instrumental Music) in Amsterdam and at the Institute of Sonology in The Hague, as a technical manager and professor at the Rijksakademie (the post graduate artist in residence academy) in Amsterdam, as a researcher on haptic interfaces and multimodal representation for multimedia home systems and networks at Philips Corporation, NL, as a researcher on novel interfaces for motion-impaired computer users at the University of Cambridge, England, and worked with the architectural offices of NOX and ONL on the interactivation of spaces. Bert has lectured and published about his work, including books and book chapters. As a consultant he worked on interactive technology for projects such as an opera at ZKM in Karlsruhe and the Media-House project of the Metapolis group of architects in Barcelona.

Together with Jonathan Impett he founded the Meta-Orchestra in 2000 as a large scale European project. With composer and visual artist Yolande Harris he has been working on real-tme performance of audio/video material addressing the architectural space with the Video-Organ. In 2001 he founded a new lab / studio for the electronic arts at Metronom gallery in Barcelona, where he also curated and organised a festival with concerts and presentations on the theme of new interfaces in January 2002. Since June 2002 he has been involved as part-time lecturer and curriculum developer at several universities in the Netherlands, on topics related to interface design or more general, the interaction between people and their electronic environment. From 2003 to 2007 he was part-time Assistant Professor at the Vrije Universiteit in Amsterdam, and a domain manager in the Industrial Design department (Technical University Eindhoven). In 2004 he has set up a new lab for the electronic arts in Maastricht, the MaasLab. He is a guest lecturer and consultant at the Hyperbody Research Group at the Architecture Department (Delft University of Technology) and the Professional Doctorate programme of User-System Interaction (TU Eindhoven). 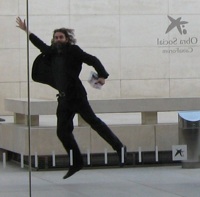 February 2015: Finally refreshed this page, first time since 2009. Apologies for all the broken links to deceased entities in the mean time, I tried to polish it up as much as I could. The idea of a plain HTML web site (well, what used to be considered a web site) was always that it would enable the author to update it as easily as the blog (later invented fad). Let's see.